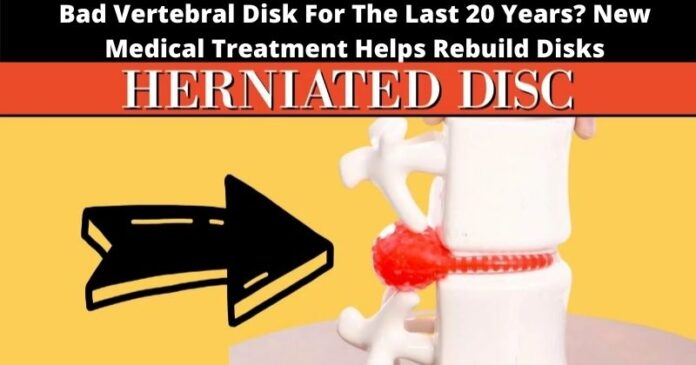 If you’re like over 80 percent of the population, you know what it’s like to have back pain. And if you are a little older than the younger generation, you know just how many of your friends have had back pain in those over 40 crowd.

Vertebral disks are constantly withstanding the pressure of sitting, standing, and bending over.

The pressure increases drastically when you pick up a load, such as lift a box or when you twist while bending. That’s why this twisting and bending at the same time motion is never recommended. It’s one of the first things you learn in back school after a hurt back.

What This New Therapy Is For Back Pain And Herniated Disks

Well if you have had a bad back for years and years – specifically a bad disk – and nothing seems to be working, then it’s time to get geared up for some new therapies on the near horizon.
Probably the most promising is stem cell therapy.

You may be thinking to yourself, “Oh I would NEVER do that. They take the stem cells from the babies – and especially the unborn ones.”

Well, in the old days, unfortunately this was true. Scientists viewed babies as a source of stem cells. And the public outcry began. People opposed stem cell therapy left and right.

The field of stem cell therapy went underground and some of the top scientists did everything they could to keep the business going. They believed that if only they could exert more brainpower, over time, they would have it all figured out and avoid the use of stem cell from babies.

Additional Related Article to Read : Are Low Hormone Levels Over 40 Related To Fatigue?

And some of them did figure out another way to create stem cells and then tested them to see their huge regenerative capacity.

Liposuction“We found that we had a more natural source of stem cells in the body,” said Dr. Richard Keller, M.D., founder of Smart Healthcare Solutions in Gold River, California. “It’s the fat in the body.”

According to Dr. Keller, every fat cell in the body is surrounded by four stem cells. When cosmetic surgeons do procedures such as liposuction, they can ‘vacuum’ out the fat in areas such as the love handles and abdominal region.

Once they have about 120 cc of fat, it’s spun down in a centrifuge type of device that separates the fat cells from the stem cells. The stem cells are then separated and kept in a vial with the patient’s name on it.

The stem cells can be banked for a few hundred dollars a year. And then when a time comes up where the stem cells for disk regeneration are needed, they can be overnighted to the hospital or clinic and matched up to their original donor.

What Stem Cells Can Be Used For

Stem cells can be used for the regrowth of cells other than for disk regeneration. A stem cell is a cell that can potentially become one of many different types of cells.

For example, some stem cells can become muscle tissue while others become skin and tissues.

Some doctors’ clinics are now using the patient’s own stem cells for disc replacement, although the procedure is not FDA approved yet. The FDA’s concerns are that the stem cells may have uncontrollable growth and that they haven’t been tested enough.

When a person’s stem cells are injected into his or her own body, then they get right to work. They start creating new cells that are needed in the body.

If the disk has been ruptured in the past, stem cells therapy will start the regeneration of the disk. But it does take awhile.

You can’t expect that you’ll have a new disk in a week or two. It’s more likely that 2 to 3 months is the most realistic when stem cells for disk regeneration are used.

Benefits Of This New Method Of Forming Stem Cells

Next StepThe advantage of the new type of stem cell therapy is that there’s no need to give injections that stop immune system reactions.

Because the stem cells for disk regeneration came from your body, you won’t have any rejection issues.

Your body likes itself and will recognize that the cells are self. If your body recognized stem cell cells that were from someone else, the new cells would be attacked by your immune system.

Thus, stem cell therapy using your own stem cells is expected to be pretty safe.

But it still is in its infancy. So if you have a disk problem now, you may want to wait about a year for the technology to be worked out more thoroughly. The good news is that there’s hope.

“Stem cell therapy is the next paradigm change in medicine. In 10 years, there will be an entire field of regenerative medicine. And it keeps getting better and better than before,” Dr. Keller said.

Back pain in those over 40 could be a whole lot different in the next 5 years.

Why Every Parent Should Take Kids Camping Monthly

Why Every Parent Should Take Kids Camping Monthly If you’re over 40, you may have teenagers and be at...
Read more
GENERAL HEALTH

Getting Enough Sleep When You’re Over 40 Is A Lot Easier Than You Think How many people are not...
Read more
GENERAL HEALTH

How To Erase The Fear Of Cancer If You’re Over 40 The fear of cancer is not often found...
Read more