muonli
Home Fitness Can You Be Too Old To Build Muscle?
Fitness

Can You Be Too Old To Build Muscle? 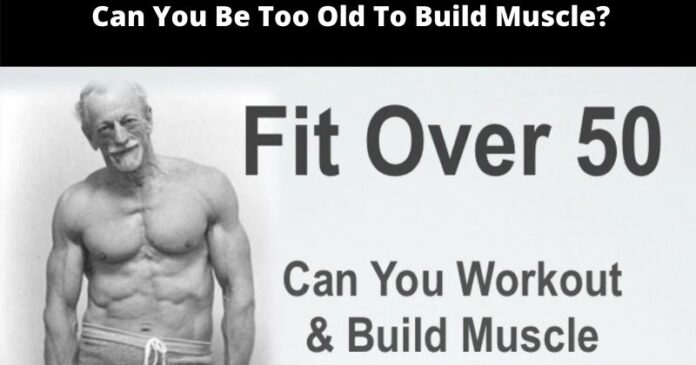 Can You Be Too Old To Build Muscle?

Are they too old to lift weights and hence build muscle?

Of this remaining percentage, a significant number still has mobility, and that includes those who use scooters but still can fully use their upper body.

Even a person who uses a scooter can do dumbbell exercises. Many older people believe that it’s not possible to build muscle after a certain age. This assumption can have very costly consequences.

More and more studies are showing that “old people” indeed can build lean muscle mass with a strength training program, whether the resistance exercises are in the form of dumbbells, kettlebells, weight stack machines, tension bands or bodyweight movements like squats and wall presses.
Like the old saying goes, “The only people who can’t benefit from exercise are dead.”

Even a bedridden person, who has use of the arms, can gain some muscle (e.g., pressing light dumbbells above the chest, or pulling tension bands downward from an anchor point above the bed).

Additional Related Article to Read :  Over 40 Jogging: Don’t Start One Up Before You Read This Article!

If older people with limitations (e.g., scooter) are capable of lifting weights, what about all the people of retirement age who golf, bowl and go for extended walks sightseeing? What’s keeping them from conducting weight workouts?

Not only is one never too old to build muscle, but there really is no excuse for why people over 60, and especially people over 40, should not strength train.

Frank Mayer et al, from the University of Potsdam, literally showed that grandpa and grandma can gain muscle with resistance exercise.

The researchers found that in subjects over age 60, consistent resistance training resulted in improved muscle strength, decreased muscle shrinkage, and stronger bones and tendons. These improvements lead to a reduced risk of falling.

The study also showed that intensity makes a difference. Older people should not limit themselves to tiny dumbbells or the lowest weight amount on a machine simply because they’re over a certain age. The more intense the workout, the greater the results.

According to the study, an increase in muscle mass results when the intensity is 60-85 percent of the amount of maximal weight that a person can lift just one time.

So if a senior citizen can press a 50 pound barbell just once, then a weight load of 30-40 pounds (for repetitions) would be required to build muscle.

Photos of “old-timers” who are strength building enthusiasts are spectacular. No, these aren’t images of men who are freakishly built up with stiff-looking muscle, or grannies who have chests and shoulders like their sons.

These are individuals whose bodies look 20 or 30 years younger than their chronological age. It’s not just about vanity, of course.

Older people who work out with weights simply don’t get sick as often as their sedentary counterparts; they don’t suffer the same degree of injuries, aches or pains; the rate of high blood pressure and brittle bone disease is markedly lower as well.

The body has the amazing ability to adapt to an unfamiliar work load. If this work load is repeated, the body will get stronger and more efficient, no matter what age.

Exercises For Building Muscle Need Not Be Fancy, Complicated Or Require Balance

Sticking with the classic basics is all that’s necessary, even though today’s personal trainers often have their older clients struggling to perform strange balancing moves.

▸ One form of strength training is simply standing up and down repeatedly from a chair: chair squats. The resistance is one’s bodyweight. At the gym, one can do horizontal leg presses, plus leg extensions and hamstring curls.

▸ Healthier older people can do dumbbell squats and work their way up to Smith machine squats.

▸ The effectiveness of isolation exercises for older people who wish to gain muscle pale in comparison to that of compound exercises.

Isolation exercises work only one muscle group at a time, and compounds work several muscle groups at a time. A person over 50 or 60 will benefit so much more from doing seated rows rather than standing around curling dumbbells.

▸ There is no practical reason for the older trainee to do triceps kickbacks, even though this is a common sight at gyms, especially among women.

The triceps area can be worked quite efficiently and more comprehensively, while other body parts get worked, if one performs the compound exercise of chest pressing.

This will work not only the back of the upper arm, but the shoulders and chest, thus burning much more fat and going a lot further as far as increasing lean muscle tissue.

▸ The older trainee needs to make sure that some of the routines are done while standing. Standing while maneuvering against resistance will dramatically improve stability, mobility and reduce the risk of falls.

Shoulder presses with barbells or dumbbells can be done standing rather than seated. In reality, if one ever needs to hoist a load overhead, he or she will very likely be standing while doing this.

▸ Another great exercise for the older person, including very sedentary ones, is that of walking around while holding weights straight at their side: farmer walks. This will strengthen the entire body.

As the aging population explodes, more and more older people are realizing just how critical it is to hold onto muscle mass, and just how possible it is to build muscle in middle age and beyond.

To read about real life people in middle and retirement age who have dramatically transformed their bodies with strength training and other forms of exercise, check out “Fit Over 40 program.”

Over 40 ebook“Fit Over 40 program” also explains how anyone of any fitness level, even those with disease, can get started on a health-promoting program that will bring back life to one’s years.

source : Never Too Late: Building Muscle and Strength After 60

Share
Facebook
Twitter
Pinterest
WhatsApp
Previous articleOver 40 Jogging: Don’t Start One Up Before You Read This Article!
Next articleWeight Training For Women Over 40: What Are The Best Bone Building And Fat Burning Exercises?
RELATED ARTICLES
Fitness

Gaining Muscle Over 40? Here’s How Many people often think that building muscle after 40 is next to impossible...
Read more
Fitness

Workouts For Men Over 40 Finding the perfect exercises for men over 40 will quickly help to catapult your...
Read more
Fitness